What is an exotic scale for guitar? The term is about as precise as “world music”, and has become to mean anything with a non-Western harmonic origin.

So, since we’re dealing with a mainly Western idiom here, an exotic scale can be a useful tool to unbox your improvisation. Exotic scales can take your guitar leads on new paths to uncovering exciting licks!

Example 1. This example is from a piece of mine called Chartres Street. The chord progression is fairly straight forward, so to make the solo interesting, I’ve included some more exotic sounding scales; The Hirojoshi pentatonic scale, the Spanish eight note scale and the Hungarian minor. These are used to bring in interesting color notes and different interval combinations on basic minor and dominant chords.

Pentatonic scales consisting of only five notes can be limiting as they have…well, only five notes. The limitation can, on the other hand, be an advantage as with only five notes each scale has a very distinctive character. I´ve used this over a D minor chord.

As the scale is built Root 2 b3 5 b6  all the notes are within the D minor territory – no outside notes. However, you will hear in the musical example that the intervallic structure gives this a clearly distinctive flavor from regular D minor playing.The Spanish eight one scale, however, has plenty of “outside” notes. The scale structure reads. 1, b2, b3, 3, 4, #4, #5, b7. 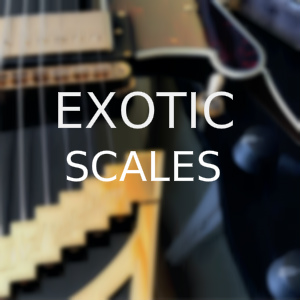 Article Name
What is an Exotic Guitar Scale?
Description
What is an exotic scale for guitar? This term has become to mean anything with a non-Western harmonic origin. Pick up some improvisation tips using non-traditional scales here!
Author
Bo Vibe
Publisher Name
BoVibe Music