What is a Jazz Chord Progression?

Jazz guys have their own lingo, as you might have picked up on! The expression “two-five-one” is bound to pop up regularly. And, no, this does not refer to some particular dance step variation of the Foxtrot, but rather to the most common chord progression sequence in Jazz: II, V, I. Literarily hundreds (probably thousands) of songs are based on a progression that would read; Dm7, G7 and Cmaj7 in C Major and; Dm7b5, G7 and Cm7 in C minor. Mastering the basic concepts of improvising on this progression and its variations in major and minor is a key to mastering jazz improv.

Example 1 The first example illustrate a substitute arpeggio approach to the sequence, playing a Vim7b5 (Bm7b5) on the IImin chord (Dmin7), a IImin7b5 (Amin7b5) on the V7 chord (G7) and a Vmin7b5 (Gm7b5) on the I7 chord (C7) ending on a bluesy phrase as a dominant I chord indicate a blues type progression. There is definitely some symmetry to this type of line as well, as it is based on the same arpeggio shape: the min7b5.

Example 3 is taking advantage of several substitution arpeggios: bIIIMa7 (FMaj7)on the IIm7 chord, bVII m7 (Bbm7) on the V7 and a III m7 (Em7) on the IMa7 chord.

Example 4 starts out with a sequenced G minor pentatonic scale on the IIm7 and then increases the tension level with a Vm7b5 followed by a bVm7b5 on the V7. Pay attention to some tricky rhythm changes in the last few beats.

Pentatonic scales over the Jazz Progression

Example 6 is based on the pentatonic as well, the V minor pentatonic of the IIm chord, then a IIMaj arpeggio on the V7, and a minor 3rd interval on the I Maj7.

Example 7 is a bebop inspired section showing how the use of a strict rhythm and passing notes in an ascending pattern keep adding urgency to the line, and by increasing the interval between the notes on the IMa7 chord this accentuates the feeling of urgency before “coming home” on a chord note, B natural – the major 3rd. 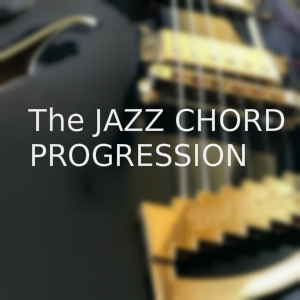 Article Name
What is a Jazz Chord Progression?
Description
What is commonly referred to as the jazz chord progression" is a ii-V-I sequence in any key. Mastering this chord progression is mandatory for all aspiring jazz musicians. Learn how to construct guitar solos on this progression here.
Author
Bo Vibe
Publisher Name
BoVibe Music